As we celebrate the CPS Codillians who represent our island in Brazil this past weekend, we would like to take a deeper dive into each one of this team’s performance in the three key FLL Challenges areas at the Puerto Rico Championship to see what makes up this winning team!

Today we take a look at their Robot Design + Robot Game:

The most visible, and arguably most exciting, part of every FLL Challenge event is the Robot Game. During the Robot Game, teams place their pre-programmed robots on the table and cheer them on as they attempt to complete the highest number of missions and achieve the most points possible within 2.5 minutes. While this is indeed a highlight of many of the events, it only showcases a small part of what teams must achieve during the Robot portion of the Events and Championships.

Behind the scenes, teams must meet with the judges and present and justify their mechanical design, explain the quality, efficiency, and automation of their programming and highlight their innovation and strategy. During this time, judges are also evaluating the teams on their level of teamwork and ownership over their own learning.  Let’s relive some of the CPS Codillians highlights from the Robot Design + Robot Game!

What the judges had to say:

We were truly impressed by this team’s eloquence and attention to detail with regards to their robot design, strategy and programming. It was extremely evident that the team came up with all aspects of their robot design and programming themselves, relying on their coach only for guidance when they needed extra motivation or help. They shone in their presentation and truly earned their high ranking in the Robot Design category. Blue, the name they gave their robot, has a highly intentional design and a very efficient and well organized programming.

What the team had to say:

How did you go about the design and construction of Blue and its accessories?

In the previous competition that we participated in we used the EV3 robot, and this robot had only one arm. We keep this idea and build it out of Spike parts.

At first, the new robot was so light that every time it braked it would lurch forward. To fix this, we added weight to its back. While the problem of the robot was going forward when braking was solved, we found out that when turning the robot needed a lot of space, and  because of that  it  could  not  fulfill  several  missions  with  this  structure. So, we talked  to  resolve  this and with the help of our mentor we decided to add another identical arm in the back part.

How many programs do you have? What missions does each tackle?

We had 4 programs. Each program had a lead programmer:

How many sensors did you use and how?

We use the distance sensor, color sensor and the gyro sensor that is part of the hub.

How did you organize your programs?

To ease the organization of our programming, we established the following methodology for each large program:

Example of our program # 3: 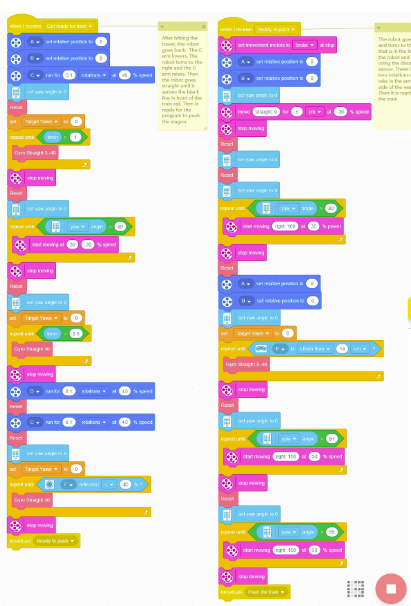 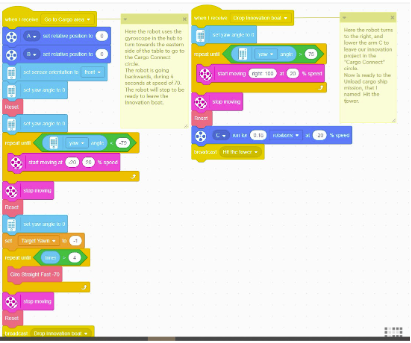 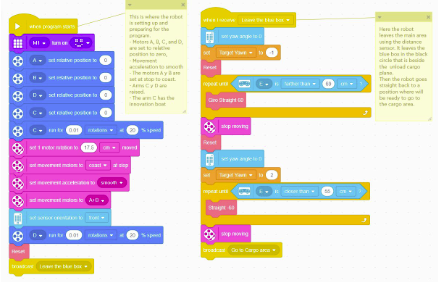 Explain what makes Blue unique:  What part or accessory stands out or is innovative?

Our robot’s arms have unique features which make missions easier.

Tell us about your experience in the robot game of the championship.

During the first two rounds of the championship, our robot Blue’s hub was malfunctioning. It was non-responsive and would not register our programs. It was somewhat frustrating for us because we had worked so hard as a team to create an innovative programing strategy and comprehensive programs that could tackle more than one mission at once. But we did not want to let down our teammates and our coach who had worked so hard to motivate us to get to where we were.

One of the awesome things about FIRST LEGO League is that you only ever have to do better than yourself in the previous round. Your only goal, other than to have fun, is to give each round your best shot. We only needed one round to go well in order to succeed, so every time our team was called to the competition table, we tried our very best.

We were very nervous when our name was called up for the last round. We had seen some teams score huge numbers of points in previous rounds, and we knew this was our last chance to stay in the race. As the ref’s yelled 3…2..1…LEGO we all held our breaths. We did not know what would happen, but through some magic Blue started to move and complete his missions!

In that one round we were able to get 245 points – after an entire day of the robot not working. We were very happy with that third round, and thanks to our perseverance, still ranked in the top 5 of the Robot Game category!! 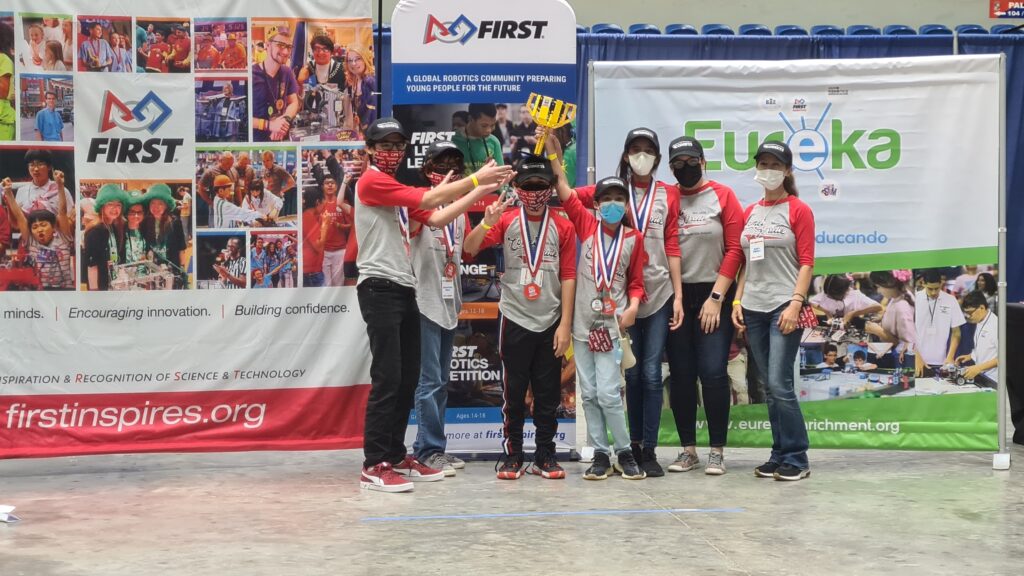