As we celebrate the CPS Codillians who represent our island in Brazil this week, we would like to take a deeper dive into each one of this team’s performance in the three key FLL Challenges areas at the Puerto Rico Championship to see what makes up this winning team!  Each day we will post about one area of the competition and see some examples of this team in action!

Today we take a look at their Innovation Project:

Every season teams must identify a problem related to the season topic that our communities face and come up with an innovative solution to solve it. Teams are judged based on the quality of their research into the problems in the topic, their research into development and potential implementation of the solution, and their communication of their solution and its potential impact with key stakeholders and the Championship judges.

During the CARGO CONNECT Season, teams investigated problems related to the shipping industry – from manufacturing to delivery.  The CPS Codillians really impressed the judges with all aspects of their innovation project – winning them the first place rank in the category! Let’s learn a bit more about this impressive project! 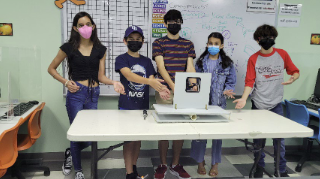 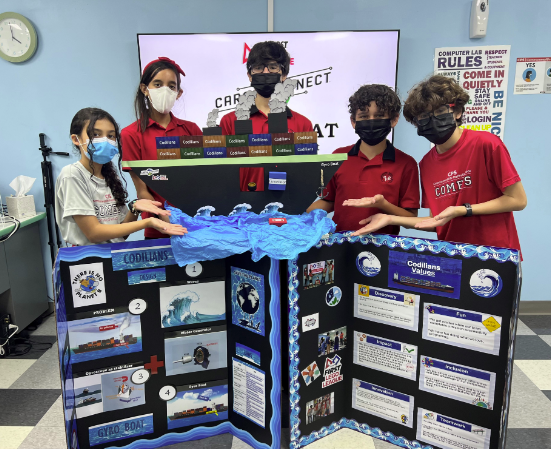 Why have we selected this problem? Why is it important?

Cargo ships are part of the problem of environmental deterioration. One big cargo ship emits as much carbon dioxide as 70000 cars. As a team we decided to select this problem because we live in Puerto Rico, and we want to help the environment and create a better place to live for us and future generations to come.

Non-renewable resources are defined by Society as, “N. (2021) as resources that include coal, natural gas, oil,  and  nuclear  energy”.  Once  these  resources  are  used  up,  they  cannot  be  replaced,  which  is  a  major  problem  for  humanity  as  we  are  currently  dependent  on  them  to  supply  most  of  our  energy  needs.  Non-renewable resources can run out with time and if it does happen it’s important to identify other ways to make things work.

What causes this problem? What consequences does it have? Where does it occur? Who or what does it affect? What dangers exist if we do not solve this problem?

Unlike vehicles and power plants, cargo ships remain conveniently out of sight to most of us.  “Nearly all cargo ships use diesel combustion engines to turn the propellers, plus diesel generators that power onboard  lighting  systems  and  communications  equipment.  Many  vessels  still  burn  heavy  bunker  fuel,  a  viscous, carbon-intensive petroleum product that’s left from the crude oil refining process. As a result, maritime shipping contributes a sizable share—about 2 to 3 percent—of annual carbon dioxide emissions,  according  to  the  International  Maritime  Organization  (IMO),  the  U.N.  body  that  regulates  the  industry.” (https://spectrum.ieee.org/the-struggle-to-make-dieselguzzling-cargo-ships-greener).

The fossil fuels energy source such as coal, oil and natural gas are used for the cargo ships as the only source of energy.  The continuous use of natural resources over time will deplete  them.  Likewise, the consumption and use of non-renewable energy sources such as fossil fuels are some of the causes of the pollution of environments such as water, air, vegetation, and one of the main causes of climate change. Some of the consequences that in the long term will affect us may include air pollution, water contamination, depletion of Non-renewable resources  and  much  more.  We can find this problem in Puerto Rico and worldwide, since we are all contributing equally and not working on a solution to the problem

Cargo ships move across the ocean. Thinking on these we read about solutions to generate electricity from the movement of the waves.  One of the most interesting is the solution to generate electricity with a system that placed a gyroscope on a swing float in the ocean, this system uses the principle of the application of the gyroscopic moment of rotating flywheels that oppose to the change of direction caused for a swing float excited by waves. But this method is not considered to be part of a boat. http://www.homepages.ed.ac.uk/shs/Wave%20Energy/EWTEC%202009/EWTEC%202009%20(D)/papers/159.pdf

2. OUR SOLUTION   The energy resources, such as the sunlight, wind, and ocean waves, are practically unlimited in their amount and may be used in ways that can reduce the careless use of fossil fuels by cargo boats.

Oceans cover over 70% of the earth’s surface. The motion of water waves in the oceans is a great source of energy and may be used to generate electrical energy.

Based  on this  idea,  we  need  to  find  a  way  to  power  cargo  boats  with  clean  energy  that  comes  from  the  movement  of  water  in  the  oceans.  It  is  necessary  to  add  a  system  in  the  cargo ships,  to  transform  the  movement of the waves to a mechanical movement, and then convert the mechanical energy motion into electrical energy.

How did you solve the problem?

As  a  team  we  distributed  the  task  of  finding  solutions  and  together  we  all  chose  the  option  of  using  a  gyroscope (sensor that we use in our robot), as the key element to transform the movement of the waves into electrical energy. The cargo boats already have a gyroscope to keep them in balance.

What the boats have already -The Gyroscope as stabilizer.

The gyroscope used in the boats is an instrument that allows to maintain or modify the direction of the boat. The gyroscope consists of a spinning flywheel, this rotating piece is at the center of the gyroscope, and when is rotating it remains stable against changes in forces caused by the movement of the ship caused by waves.

How we want to solve the problem -The gyroscope as part of the generator of electricity The  resistive  output force generated  by  the  gyroscope that  opposes  the  change  of  direction,  it  is  a  force  generated for the movement of the waves and the rotation of the flywheels. This rotating output force of the gyroscope will be connected to the input of a generator.

Then the movement associated with the change of direction of the spinning gyroscope is used to drive the rotary motor generator to continuously rotate and thus generate electricity. The generated electricity may be directly used to power the cargo ship.

The  spin  axis  of  the  gyroscope  is  the  axis about which the flywheel is spinning and is vertical to the boat hull.

When  the  cargo boat  rolls  because  of  the  waves,  the  rolling  acts  as  an  input  force to  the  gyroscope,  then  to avoid that  the  gyro’s spin  axis  changes  its  direction,  the  gyroscope  generates  the  rotation  around  its  output.  This  output  rotation will be connected to the rotor of the generator 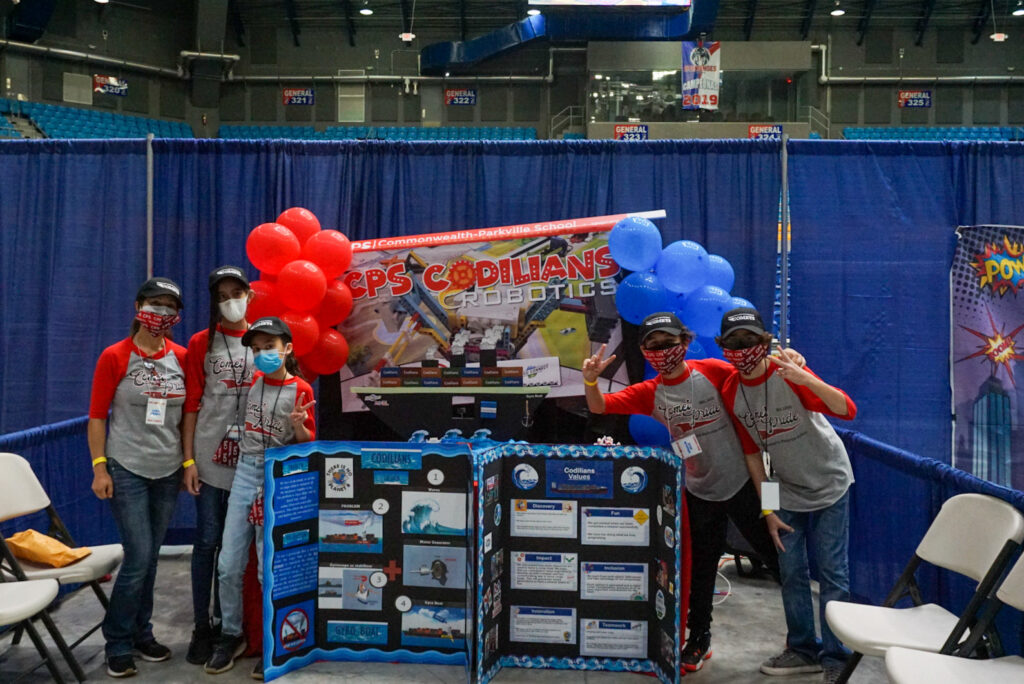 Innovation: The innovative part of our proposal is that the gyroscope that the cargo boats already have, be used in a double function: as a stabilizer for the cargo boat, and as the main element for the generation of electricity from clean energy such as the movement of the waves in the ocean.  We use the discovery value as well because we learned how wave energy, a gyroscope, and a generator work together to generate electricity. We applied these discoveries to innovate the idea of the use that can be given to a gyroscope in a cargo ship. This idea can help to change the world.

Do you want your school or robotics team to have the opportunity to represent our island? Registration is now open for the new season of the FIRST LEGO League Challenge! Sign up today: https://firstroboticspr.org/inscripcionesfll/